Protecting the Law Since 1966…

In 1966, two of the pre-eminent attorneys in Elkhart joined forces to engage in an associative practice that permitted each to benefit from the unique abilities and experience of the other. 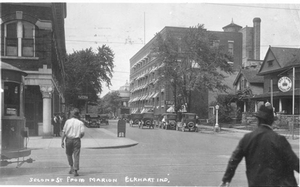 Philip E. Byron, Jr. was generally regarded as the most accomplished litigation and employment practitioner in Northern Indiana. Robert C. Daniels enjoyed equal success and renown as a real estate and business lawyer. The two had first met when both were associated with the law firm of Cawley, Happer, Slabaugh & Byron, a collaboration of the finest attorneys in Elkhart County during the 1950s and 1960s.
The firm of Byron & Daniels maintained offices in the Monger Building at the corner of Franklin and Second Streets in downtown Elkhart until 1971, when they moved into a suite of offices on the second floor of the Indiana Building at 405 South Second Street. Their new office was known throughout the area for its comprehensive law library, which featured all Indiana and Federal Statutes and Reporters, as well as countless treatises, encyclopedia and practice-specific materials. Their practice burgeoned to the extent that they determined to hire a law school graduate, and in 1973, Robert T. Sanders III, a recent graduate of Indiana University Law School, joined the firm. Bob worked closely with both Phil Byron and Bob Daniels in a wide variety of subjects, and was named as a partner in the firm in 1977. Unfortunately, Phil Byron died suddenly on May 20, 1977, but the two remaining partners continued in the practice with the same client and practice base, which included a number of insurance carriers, both major banks in the city, and a substantial array of local and regional corporations and firms. 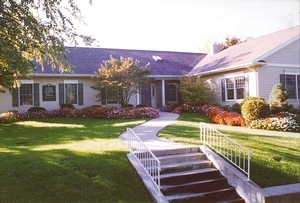 The Practice Continues to Grow…

As the practice continued to grow, the partners sought another attorney, and were fortunate to be in the right place at the right time to hire Michael A. Pianowski when he returned to Elkhart after graduating from Valparaiso Law School. Mike had worked as a banker for several years in Elkhart and had many friends and business contacts in the area, which enhanced the firm’s client base and contributed strongly to its continuing success

Shortly after Mike joined the firm, the offices were moved to the fourth floor of the Communicana Building, at 421 South Second Street. It soon became evident that the available legal business exceeded the capacity of the attorneys, and James L. Todd, a Naval Academy and Valparaiso Law School graduate, joined the firm as a lateral hire from his previous position at a major firm in Columbus, Ohio. Other associates soon followed, and the firm quickly realized that it would need more space to accommodate its growing practice.

In 1987, the firm built a new office building at the corner of 4th and High Streets in Elkhart. With the new building came a new name for the firm: Daniels, Sanders & Pianowski, but the attorneys and practice remained the same. The firm enjoyed a long and steady progression of success throughout the 1980s and 1990s, acquiring special expertise in areas of estate planning and merger and acquisition, while continuing a very active litigation and employment practice. During that time, Matthew A. Yeakey, current partner, and Jason G. Ward, former partner, were hired after graduation from law school, and David G. Thomas joined the firm as an experienced lateral hire. In 1995, our good friend and mentor Bob Daniels passed away.

Because of increasingly cumbersome names as the firm continued to grow, the name of the firm was shortened to Sanders • Pianowski, LLP in 1996. The addition of more attorneys and staff eventually resulted in a bulging at the seams of the High Street building, and in the early 2000s, the partners began searching for a new home for the firm. After an exhaustive search, the firm settled on a picturesque location on the recently developed Elkhart Riverwalk directly across from Island Park. An old warehouse was removed from the property, elaborate plans for an elegant new two-story brick building were developed, and ground was broken in June of 2002. On Valentine’s Day, 2003, the move was made, despite the fact that the masonry work was not fully completed, and 11 attorneys and an equal number of staff employees settled into their beautiful new accommodations at the confluence of the Elkhart and St. Joseph Rivers. Since then, the firm has continued its commitment to excellence in providing a wide variety of legal services to the community and region.

Professional service to our clients is our first and compelling priority.

A Commitment to Excellence…

Legal representation is the hallmark of our business practice. We have the ability, experience and resources to successfully counsel clients in an extensive variety of transactional and situational legal matters. Attorneys in the firm have negotiated complex transactions with national and even international implications. While the core of our practice is small and medium sized firms, we also have a long and accomplished history of service to companies with locations throughout North America. The firm is small enough to be responsive on a personal basis, but big enough to handle any business needs.

Attorneys at the firm are strongly committed to the support of our community and have taken leadership roles in a multitude of local organizations dedicated to the betterment of life. Our attorneys have volunteered to serve on boards and committees for a wide variety of civic and charitable nonprofits, including Children and Parent Services (CAPS) of Elkhart; Oaklawn Foundation; Elkhart County Community Foundation; Elkhart Noon Kiwanis; ETHOS (Encouraging Technology and Hands On Science); Downtown Elkhart, Inc.; Junior Achievement of Elkhart County; Big Brothers Big Sisters of Elkhart County, Northern Indiana Hispanic Health Coalition, Loveway, and many others…

At Sanders • Pianowski, LLP, our emphasis is on finding creative solutions to legal problems. Our reputation lies in our ability to bring parties together to resolve disputes without unnecessary legal intervention. This is achieved through a proactive approach to our clients’ needs by seeking to protect them from potential exposure by thoughtful strategic planning.